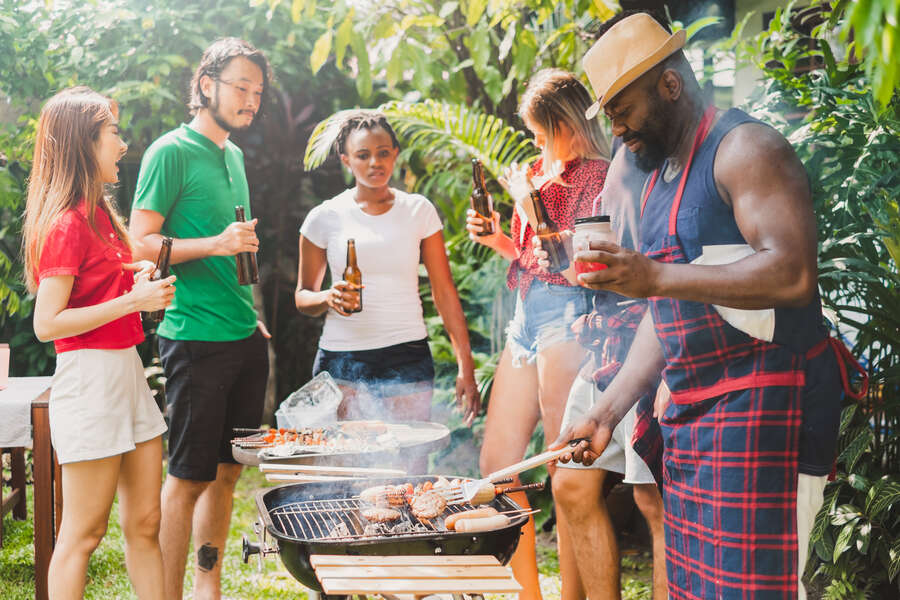 The Fourth of July is about much more than grills and parks or burgers and hotdogs. (I mean, it’s literally about something else, but as far as the food is concerned, it’s about more than those summer staples.)

There are restaurants in every corner of the US serving up specials and deals that are tough to pass up. Even if you’re spending part of the day sweating over a grill, perfecting your locally-famous burger recipe, there are two more meals in the day. You’re going to find deals at familiar restaurants like IHOP, 7-Eleven, California Pizza Kitchen, Wendy’s, and more.

To help you on your way to some great meals on the Fourth of July, here are the best food deals you’ll find for the holiday.

Wine and Cheeseburger: Harley and Lara Pair Falafel with Wine

Free Food on the Fourth of July

7-Eleven, Speedway, and Stripes
The deal: Slurpee Day is being spread out across 11 days this year. Speedy Rewards and 7Rewards members will get a coupon for a free small Slurpee in their account on July 1 and you can redeem it anytime over the next 11 days.
When: Through July 11

California Pizza Kitchen
The deal: You can get a buy-one-get-one-free deal on Pizza, Pasta, or Salad. Order now and you’ll be able to get the freebie on a return visit from July 5-12.
When: Order from July 1-4

IHOP
The deal: Kids get a free entrée of the kid’s menu with the purchase of an adult entrée.
When: Through August 21, 4-10 pm

Carvel
The idea: Buy a junior cup or cone and get one for free when you flash a recent movie ticket stub. The shop is posing it as an alternative to popcorn due to the recent popcorn shortage.
When: Through July 4

Noodles & Company
The deal: Noodles Rewards members get a free side with the purchase of a classic entrée.
When: Through July 6

Chuck E. Cheese
The deal: Get a free small order of Dippin’ Dots with any food purchase. Get ready to taste the future.
When: July 4-10

Cinnabon
The deal: Buy a Classic Roll, MiniBon, or Center of the Roll and get another for free when you use the code “NOPOPCORN” in the mobile app.
When: Through July 4

Auntie Anne’s
The deal: Buy a pretzel item, and you’ll get another for free when you use the code “NOPOPCORN” in the mobile app.
When: Through July 4

Auntie Anne’s
The deal: Pretzel Perks members get a free Original or Cinnamon Sugar Pretzel with the purchase of one of AA’s new Dragonfruit Mango drinks.
When: Through July 4

Food Deals on the Fourth of July

On the Border
The deal: Buy an entrée, get a second one for half-off. Just mention “BOHO” to your server when you order.
When: Through July 4

Pie Five Pizza
The deal: Pie Five Circle of Crust loyalty program members can grab a personal pizza for $5.99. Use the code “MAGIC MONDAY” in the app or mention it at checkout in-store.
When: Every Monday

Miller’s Ale House
The deal: Military personnel get half-off an entrée with proof of their service.
When: July 4

Gopuff
The deal: The delivery convenience store app is offering buy-one-get-one-half-off Takis, 15% off Frito Lay products, and other deals.
When: July 4

KFC
The deal: Get free delivery when you order through the KFC app or website.
When: July 4-24

Marble Slab Creamery
The deal: Rewards members can redeem a randomized prize in the app at any point during National Ice Cream Month. You might get a free small ice cream, BOGO small ice cream, or other smaller discounts.
When: Through July 31

Bonchon
The deal: Get free delivery all month.
When: Through July 31

Qdoba
The deal: Reward members get 4x the usual points on any purchase for the Fourth of July. (Same deal is available in Canada on July 1 for Canada Day.)
When: July 4

Pizza Deals on the Fourth of July

Hungry Howie’s
The deal: Get Howie Bread for $.99 with an online carryout order of at least $15. Use the code “JULY4.”
When: Through July 4

Gift Card Deals on the Fourth of July

California Pizza Kitchen
The deal: Spend $50 on digital gift cards and get a $10 bonus card.
When: Through July 10

Here’s our huuuuuuuge running list of all the free food you can get right now, as well as the best pizza deals, reward programs, birthday freebies, gift card offers, food delivery offers, alcohol delivery deals, and perks for getting your vaccination against COVID-19. If you want a little more than, say a free taco, we also have you covered with a long list of meals you can get at fast food chains under $5. You’re welcome.