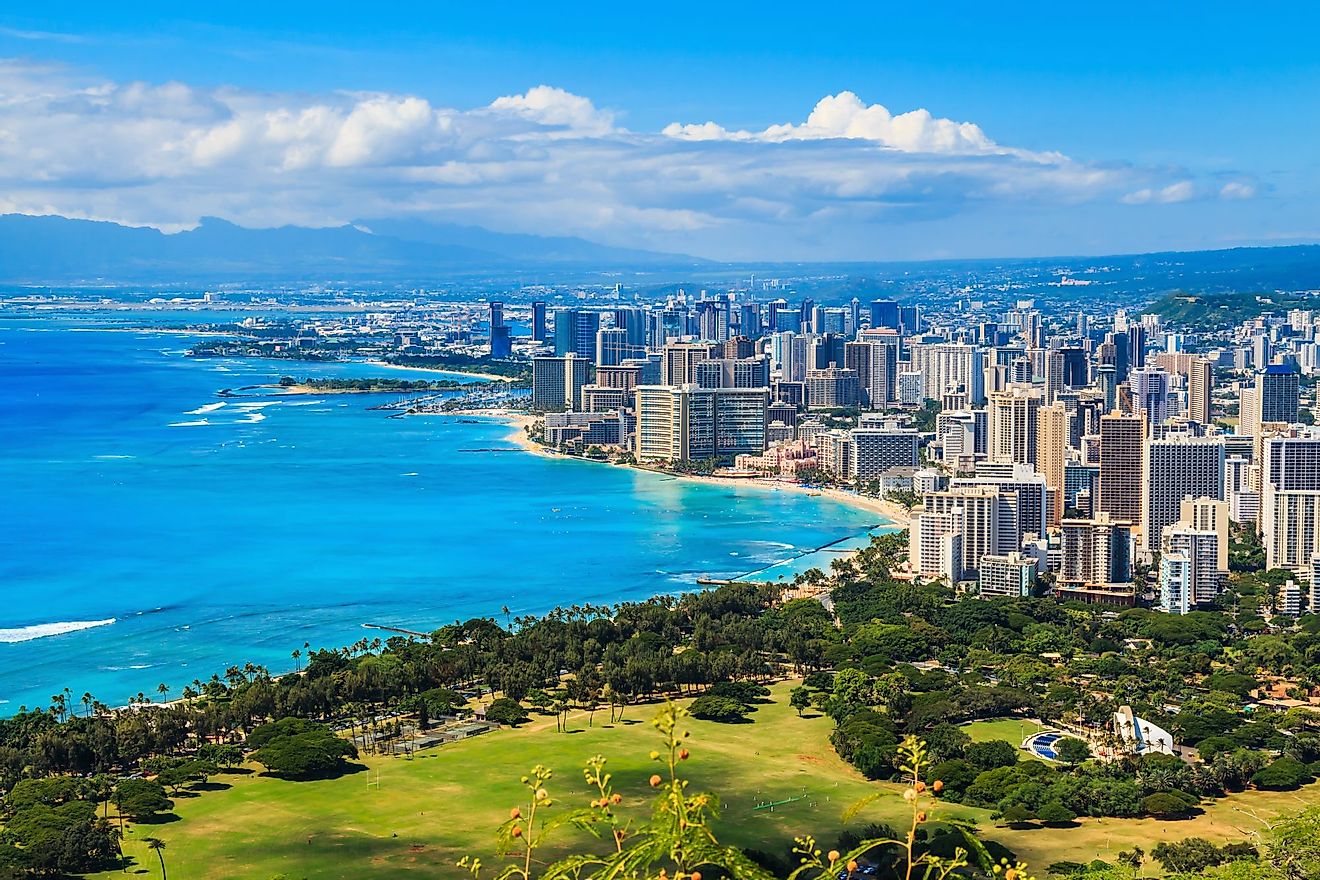 Honolulu is one of the most famous cities on the planet. Even those who never visited the city are familiar with its name. It is the capital of the US state of Hawaii and one of its most populated areas. 80% percent of Hawaii’s residents live in the county of Honolulu. Both the county and the city are referred to as Honolulu since they are consolidated and administered as a sole entity on the island of Oahu. The name is translated to “place of shelter,” which is represented in the serenity of the area and its people’s harmonious way of living. Honolulu dates back to the twelfth century and witnessed significant events like the attack on Pearl Harbor. It is now considered a shipping and routing hub that connects the state of Hawaii to other regions and islands.

Geography And Climate Of Honolulu

Honolulu is located on Hawaii’s Oahu Island and is situated along a 10 miles stretch on the island’s southeastern coast. It reaches about 4 miles deep into the plains of Oahu till the foothills of Koolau. Honolulu is considered to be far from the US mainland, where the closest place is the Point Arena Lighthouse, which is located 3,787km in northern California. Several volcanic structures represent one of the city’s landforms. Diamond Head, Koko Crater, Salt Lake, Aliamanu, and Punchbowl Crater are the most famous. The city’s narrow flat coastal plain is characterized by its industrial and commercial developments, whereas the ridges and the valleys inland contain the different residential neighborhoods of Honolulu. The Downtown is the leading financial and governmental area, Kakaako is a lesser industrial district, and Waikiki is the touristic district that contains the Waikiki beach. The historic Pearl Harbor is located in the city’s Ewa District. All these places attract millions of people every year. Tourists can also enjoy history-related landmarks or water and outdoor activities in the beautiful natural sites.

The islands’ first settlers were Polynesians and explorers from the Marquesas between 500 and 1000 C.E. Then, in the 12th century, Tahitian immigrants resided in the area, followed by a probable exploration attempt by a Spanish navigator called Juan Gaetano. The first real foreign voyage was made in 1778 by Captain James Cook, one of the most prominent explorers of the 18th century. After discovering more islands to the north, he named them the Sandwich Islands after the fourth Earl of Sandwich, John Montagu. Another exploration vessel sailed from England led by Captain William Brown in 1794. He docked his ships in what is now Honolulu Harbor. This resulted in the arrival of other ships making the harbor a transportation hub for sailing ships between Asia and North America. Kamehameha I, a renowned Hawaiian king, seized control over Oahu in 1804 and made Waikiki his capital. He then relocated to Honolulu in 1809. What used to be his governing center is now the city’s Downtown. Kamehameha III was another famous native king who made Honolulu his permanent capital. With the other kings who followed him, they modernized the city, and the area was made into a commercial center within the islands. The period between the end of the 19th century and the starting of the 20th century witnessed the tragic fall of the Hawaiian monarchy. On February 22, 1900, the United States annexed Hawaii and proclaimed it an American state by 1959. World War II did not fail to add more tragedy to the city. Pearl Harbor was attacked by the Japanese air force resulting in many casualties.

The Population Of Honolulu

The total population of Honolulu is 343,302 as per the latest 2020 US census. The entire county reached a population of 1,016,508 people. The racial makeup was 53.2% Asian, 18.4% White, 7% Hawaiian natives, 2% Black, 18.4% more than two races, and about 1% Native American. The official languages are Hawaiian and English. Hawaiian is required in official state business. The common language used for other formal business is Hawaiian English. English is the most used language at 73%. Other spoken languages include Tagalog, Japanese, and Chinese. The primary religion in Honolulu is Christianity, with over 68% identifying themselves as such. Buddhism, Shinto, and Tao are other famous religions.

The Economy Of Honolulu

Hawaii joining the US states caused an economic boom, with Honolulu being in the middle. The city remained a commercial and transportation hub and a crossroads of trans-pacific shipping and air routes. Tourism has been one of the highest contributing industries to the city’s economy, reaching over 24% of the local economy. Many manufacturing plants of different specializations are there in the city, such as oil, cement, steel, aluminum, pineapple canneries, sugar refinement, and clothing. As for transportation, airports, shipping ports, and international airports have considerable contributions to Honolulu’s economy. The city is populated to the point that rush-hour experiences heavy congestion on its highways and freeways and is at times unbearable. The Honolulu International Airport is the primary aviation port of the state and one of the busiest in the entire country. The unemployment rate is 7.6%, more than the US average of 6%. The top jobs in the city include many sectors such as manufacturing, food accommodation, education, and healthcare.

Landmarks And Culture In Honolulu

Honolulu is the most visited city in Hawaii. The city’s beauty, history, and natural reserves are global attraction sites for tourists worldwide.

Waikiki Beach is the top destination for tourists. It is the perfect getaway on a hot summer day. The beach is large and broad, with the water being crystal clear.

Diamond Head is a great volcanic crater and one of the most picturesque landforms in the state, especially from above.

Pearl Harbor holds historical value for the people of Hawaii and the United States. It has a museum that contains artwork representing the tragedy that occurred in World War II.

Many other sites should be discovered, like the botanical gardens, the Honolulu Zoo, and further natural reserves that are just the perfect place to hike or stroll around, witnessing true Hawaiian beauty.